Danger on the tracks: Unsafe rail cars
carry oil through US towns

"For two decades, federal officials have warned that the tank car that carries oil and ethanol, known as the DOT-111, has a serious design flaw and can split open in an accident, turning a derailment into a fiery catastrophe. At least five times since 1991, the National Transportation Safety Board (NTSB) has raised concerns about the car’s design, including its relatively thin metal skin and the possibility that cars could tear holes in each other during accidents, creating a domino effect of spills." 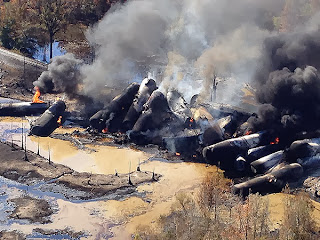