"The rail and chemical industries have committed to a safer design for new tankers but are pressing regulators not to require modifications to tens of thousands of existing cars, despite a spike in the number of accidents as more tankers are put into service to accommodate soaring demand for ethanol, the highly flammable corn-based fuel usually transported by rail."

"Industry representatives say a retrofit isn't feasible because of engineering challenges and costs. They insist the threat of serious accidents is overstated." 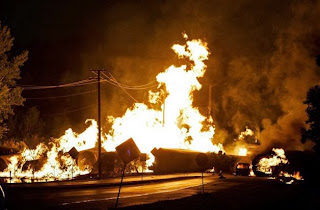 FILE - In this June 19, 2009 file photo, a car at right is seen engulfed in flames from rail cars loaded with ethanol that derailed in Rockford, Ill. A Rockford woman died as she tried to flee the derailment. For two decades, one of the nation’s most common types of rail tanker, known as a DOT-111, has been allowed to haul hazardous liquids from coast to coast even though transportation officials were aware of a dangerous design flaw that almost guarantees the car will tear open in an accident. The rail and chemical industries have committed to a safer design for new tankers, but they do not want to modify tens of thousands of existing cars. That’s despite a spike in the number of accidents. (AP Photo/Rockford Register Star, Scott Morgan) MANDATORY CREDIT
Posted by Tracy Prescott MacGregor at 3:15 PM